Governor Greg Abbott today announced that the City of Miles, having completed the multi-step training and certification process, has been designated as a Film Friendly Texas community by the Texas Film Commission. For more than 50 years, the Texas Film Commission has helped grow local jobs and economies by promoting the Lone Star State as the premier destination for film, television, commercial, animation, visual effects, video game, and extended reality (XR) production.

"I congratulate the City of Miles on earning the Film Friendly Texas designation and joining more than 160 other Texas communities who have received this recognition," said Governor Abbott. "The Lone Star State is brimming with promise, and I look forward to continuing to work alongside all of our communities to ensure they have the knowledge and tools needed to succeed. Through the Film Friendly Texas training and certification process, communities large and small are readied to help match local businesses with production-related needs, creating jobs for Texas-based crew members and local residents, as well as spurring on-site spending at local small businesses. I am proud of all the Texas Film Commission has accomplished in helping communities like Miles market their unique appeal and support local job creation through media production."

"Congratulations to the City of Miles on their Film Friendly Designation by the Texas Film Commission," said Representative Drew Darby. "Miles is a tremendous West Texas community that offers an abundance of opportunity and history. This Film Friendly Designation will help the Miles economy grow by creating local jobs, and allowing the community to market their distinct West Texas appeal."

"My congratulations to the City of Miles on their vision to grow and market their community as a Film Friendly destination," said Senator Charles Perry. "Showcasing the many assets in their rural community from the many fields and farms to historic sites will serve the economy and grow local businesses."

"Miles is a rural community just on the edge of where West Texas begins," said Miles City Council Member Jane Jeschke. "We may be small, but we are bursting with history and hospitality. Our downtown buildings and brick streets bear witness to the days in the early 1900s when Miles was considered a 'wild west' town. We are ready to showcase this history and our city to the world, and we are excited to be part of the Film Friendly community in the great state of Texas."

Located just east of San Angelo, the City of Miles joins more than 160 Film Friendly Texas communities from across the state that receive ongoing training and guidance from the Texas Film Commission on media industry standards, best practices, and how to effectively accommodate on-location filming activity in their community.

The Texas Film Commission in the Governor’s Economic Development and Tourism Office has attracted $1.74 billion in local spending local spending and created more than 162,000 production jobs across the state from 2007 to 2021. 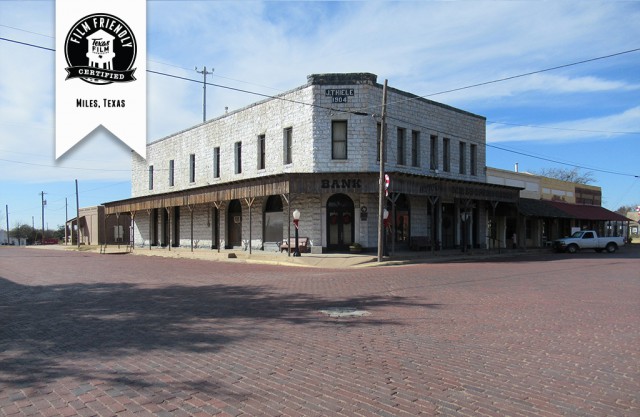