Governor Greg Abbott today announced that the City of Marlin, having completed the multi-step training and certification process, has been designated as a Film Friendly Texas community by the Texas Film Commission. For more than 50 years, the Texas Film Commission has helped grow local jobs and economies by promoting the Lone Star State as the premier destination for film, television, commercial, animation, visual effects, video game, and extended reality (XR) production.

I congratulate the City of Marlin on earning the Film Friendly Texas designation and joining more than 160 other Texas communities who have received this recognition,” said Governor Abbott. “The Lone Star State is brimming with promise, and I look forward to continuing to work alongside all of our communities to ensure they have the knowledge and tools needed to succeed. Through the Film Friendly Texas training and certification process, communities large and small are readied to help match local businesses with production-related needs, creating jobs for Texas-based crew members and local residents, as well as spurring on-site spending at local small businesses. I am proud of all the Texas Film Commission has accomplished in helping communities like Marlin market their unique appeal and support local job creation through media production.

“I could not be more proud of the City of Marlin for being designated as a Film Friendly Texas community by the Texas Film Commission,” said Senator Brian Birdwell. “It's no small feat to receive this designation, and these types of opportunities don't arise without the determination and extensive efforts of the local community. I am so honored to represent the people of Marlin; their dedication and creativity is a testament to Senate District 22 and the entire state of Texas.”

“Congratulations to the City of Marlin on this well-deserved designation,” said Representative Kyle Kacal. “I look forward to seeing the added economic growth and opportunity that the Film Friendly Texas designation will bring the Marlin community.”

“The roots of Marlin are older than the State of Texas itself; there’s culture and history here that deserve to be showcased,” said Bryan LeMeilleur, Director of Tourism and Marketing, City of Marlin. “Becoming a Film Friendly Texas certified community allows the City of Marlin to display many of our historic buildings, homes, and landscapes through entertainment and interactive mediums. Future productions will help create an immediate economic impact for our community, followed by long-lasting film tourism opportunities like the Texas Film Commission’s Texas Film Trails program. Marlin is a unique Texas town, perfectly positioned to offer the seclusion sought by the NY Giants for Spring Training in the 1910s, but with quick access on TX-6 or TX-7 to larger urban areas such as Waco or Temple. ‘The Hot Mineral Water City of Texas’ is ready for another close up… and, Action!”

The City of Marlin, the county seat of Falls County in the Waco metro area, joins more than 160 Film Friendly Texas communities from across the state that receive ongoing training and guidance from the Texas Film Commission on media industry standards, best practices, and how to effectively accommodate on-location filming activity in their community. 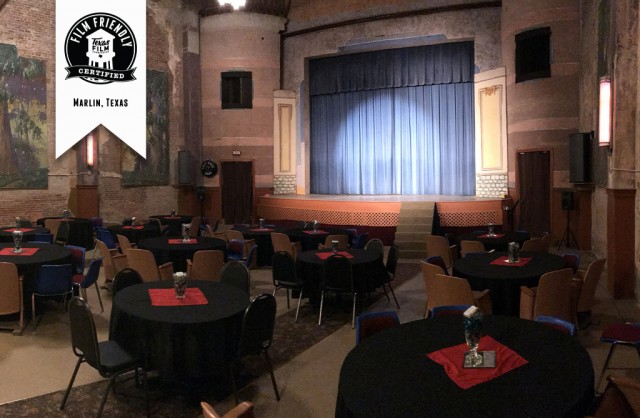