"With support from the Texas Music Office, the Texas music industry added 2,000 new direct permanent jobs last year, for a total of nearly 97,000 direct permanent music industry jobs in communities all across the Lone Star State,” said Governor Abbott. “The music industry is a key driver of economic growth in Texas even beyond the $9.6 billion in economic activity in 2018. Music is a big part of ‘Brand Texas’ and serves as a competitive advantage — drawing visitors from across the globe, acting as a magnet to attract and retain a talented workforce across industries, and supporting continuing business recruitment and expansion efforts. And I’m proud of the work of the Texas Music Office in helping to generate this measurable economic return."

“Our state’s diverse and vibrant music culture undoubtedly plays a substantial role in growing local jobs and the Texas economy, and that’s why it’s vital that we measure and report its economic impact,” said Brendon Anthony, director of the Texas Music Office within the Office of the Governor’s Economic Development and Tourism Division. “The Texas Music Office is dedicated to supporting this industry and creating a more supportive and interconnected statewide network of industry professionals so we continue to enjoy positive growth — not only in this sector, but in the Texas economy as a whole.”

The key findings from the study conducted by TXP Inc. and economist Jon Hockenyos for the Texas Music Office show that the economic impact of the Texas music industry has grown from 2017:

The ripple effects associated with the direct injection related to music businesses and music education bring the total impact (including the direct effects) to more than 209,000 permanent jobs, $6.5 billion in earnings and $23.4 billion in annual economic activity in 2018 in Texas.

The State of Texas also realized approximately $390 million in tax revenue from these impacts. 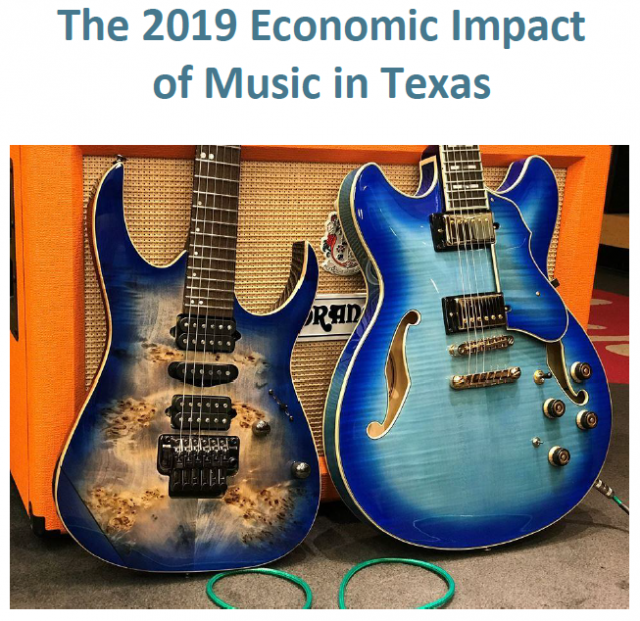