As the 4th TMO economic impact study is being written in January 2021, the pandemic is surging across the United States, with record numbers of cases and hospitalizations being reported.  As a result, much of the hospitality and entertainment segment of the economy is shut down, as the demands of public health require social distancing that renders bars, festivals, and live music essentially unviable. The results presented here are pre-pandemic, reflecting activity as of the end of 2019, and should be seen as a benchmark against which the effort to resuscitate and revitalize the music sector post-pandemic can be measured.

The figures outlined at least partially document the substantial role that music plays in Texas’ economy, and the fact that it has grown steadily from the initial findings done in 2015.  However, there is more to the story. Much energy and effort have gone into analyzing the reasons that drive economic growth in Texas, with an exceptional range of activity and opportunity in music and the creative space clearly a major factor. Texas is a place that appreciates creativity and culture in a variety of evolving forms, and the incredible diversity of the local scene undoubtedly serves to both attract and retain talented people. This in turn has a significant impact on business recruitment, retention, and expansion, as well as local entrepreneurship.

Moreover, music is a crucial element of “Brand Texas” that draws visitors from across the globe, a key element of recovery post-pandemic for the hospitality sector.  As Texas looks to its economic development future, the creativity expressed through music is a fundamental comparative advantage – the goal remains to identify the key investments, policies, and regulatory changes that can support the monetization necessary for sustainability and growth.

The Texas Music Office is the State of Texas' official economic development office for the Texas music industry, and the office's resources are an unparalleled source of information into why the Texas Music industry annually has a multi-billion dollar economic impact on the state's economy. 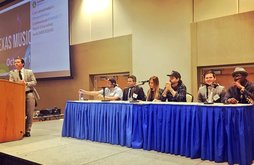