AMC's TV series Fear the Walking Dead, a spin-off of The Walking Dead, follows a family of survivors in a post-apocalyptic world. Season 4 brings the survivors to Texas, where they must continue to endure the Infected "walkers," plus a new group of strangers they meet along the way.

Production of the series relocated to the Lone Star State for Season 4, utilizing a number of existing Texas locations that were transformed into abandoned spaces for the post-apocalyptic setting. From a state-of-the-art baseball stadium in Round Rock to a popular water park just outside of the Austin metroplex, there is no shortage of exciting locations that fans have seen on their TV screens. So take the journey across Central Texas, but use caution - you never know when a zombie is just around the corner! 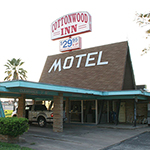 After killing an Infected in the motel office, Madison (Kim Dickens), Victor (Colman Domingo) and Naomi (Jenna Elfman) sleep overnight at the deserted Cottonwood Inn. While staying overnight, Naomi divulges her secret: she's taking them to an abandoned FEMA Shelter where she knows there are supplies. When Madison and Victor wake up, Naomi is gone. 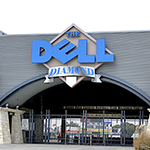 The Diamond makes its first appearance in Episode 2 as the abandoned baseball stadium that Madison, Alicia, Strand, Nick and Luciana establish as their new home, set with living quarters, an irrigation system, and even crops. Soon, however, the villanous Vultures arrive at the stadium threatening the survivalists' new life. In Episode 7, we discover exactly what the Vultures have been threatening when they bring a surprise to the gates of the Diamond. 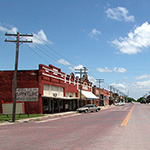 Downtown Bartlett | 'Another Day in the Diamond' (Ep. 2)

In Episode 2, downtown Bartlett is one of the Texas ghost towns visited to retrieve supplies. Like many of the towns in this post-apocalyptic world, this one is also abandoned with no soul in sight. Luckily, present-day Bartlett is alive and well and known to some as "The best little town in Texas." 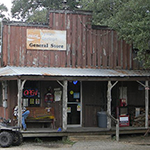 In the flashback episode tracing the origins of John Dorie (Garret Dillahunt) and Naomi (Jenna Elfman), the pair visit a general store in search of supplies to fight the Infected that continue to swim downtstream to their cabin hideout. After taking supplies, they eventually find a swarm of the Infected just down the road. 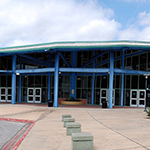 In Episode 6, Naomi (Jenna Elfman) returns to retrieve medical supplies and tools from the abandoned FEMA Safe Zone, but becomes trapped by walkers. She narrowly escapes thanks to the help of Madison (Kim Dickens) and Victor (Colman Domingo), who soon discover an integral revelation about Naomi's past. 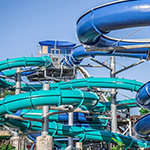 Naomi (Jenna Elfman) & Alicia (Alycia Debnam-Carey) travel to the abandoned waterpark to retrieve supplies, which they spot at the top of a waterslide. Naomi is soon confronted with one of the Infected and ends up in a tense battle on one of the waterpark rides, narrowly avoiding a pool of walkers thanks to the help of Alicia.