AUSTIN – The Texas Film Commission (TFC) and the Texas Archive of the Moving Image (TAMI) announced the launch of a new online exhibit examining the history of industrial filmmaking in Dallas. Mavericks and (M)ad Men: The Industrial Film Legacy of Dallas is hosted on Google Arts & Culture, the exhibit features 13 videos submitted to the Texas Film Round-Up by Dallas media producers and Texas organizations to tell the story of the independent filmmakers who helped turn the Texas metroplex into an epicenter for commercial film production.

Before Dallas became a popular destination for film and television production, resident creators had already cultivated national renown for a different kind of production—commercial production of newsreels, industrial and promotional films, government and educational films, and television commercials. Showcasing videos from TAMI’s online collection, this digital exhibit takes a closer look at a few of the companies and personalities that helped earn Dallas the nickname "Little New York of the Southwest."

Any Texan can probably name at least one film or television series shot on location in the Lone Star State, but the industry here encompasses so much more than that," said TAMI’s Exhibit Curator Katharine Austin. "In introducing us to a few of the pioneers who helped make Dallas such a hub for film production, the exhibit also highlights what I consider some of the most fun and entertaining content found in TAMI's online collection.

Highlights include marketing films for Pearl Beer and advertisements for brands like Dr Pepper, Imperial Sugar, and Frito-Lay. The moving images featured in the exhibit are the result of the Texas Film Round-Up, TAMI’s partnership with TFC to digitize and provide access to films and videotapes documenting Texas.

Commercial production continues to be a vital part of the media production ecosystem. It provides access into our everyday lives through the goods and services we utilize, the jobs we hold, and the stories we share. More importantly, commercial production provides creative professionals a means to advance their craft and also make a living," said Stephanie Whallon, Director of the Texas Film Commission. "We are glad to partner with TAMI to highlight such an important part of the media production industries in Texas and to celebrate that legacy and lasting impact.

The exhibit will also be celebrated in TAMI’s February Archive Dive, the organization's streaming video and conversation program, as well as at a screening in Dallas in March. More details on both coming soon.

About TAMI: The Texas Archive of the Moving Image (TAMI) is an independent non-profit organization founded in 2002 to discover, preserve, make accessible, and serve community interest in Texas’ moving image heritage. Since 2008, TAMI has partnered with the Office of the Governor’s Texas Film Commission (TFC) to administer the Texas Moving Image Archive Program, providing new access to more than 50,000 films and videotapes as well as educational resources exploring Texas media history.

About TFC: The Texas Film Commission in the Office of the Governor’s Economic Development and Tourism Division helps to grow local jobs and local economies by promoting the Lone Star State as the premier destination for film, television, commercial, animation, visual effects, video games, and extended reality (XR) production. 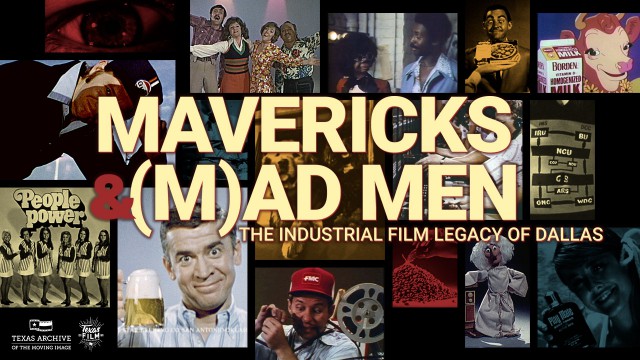