The 1980s were a decade of transition and development for Texas onscreen. While Americans reflected upon their national identity, Texans did much the same with their state’s identity. Urbanization, which had already begun to emerge by the start of the decade, would reveal itself as one of the great driving forces behind much of the development to come over the course of the 80s. Developments that built upon the framework laid by the pioneers of the preceding decade and would lead inevitably into what we now think of as modern Texas, or more simply, Texas. One film released in the summer of 1980 would wrestle with the elemental themes that would define the state for most of the decade and beyond. That film was James Bridges’ Urban Cowboy. 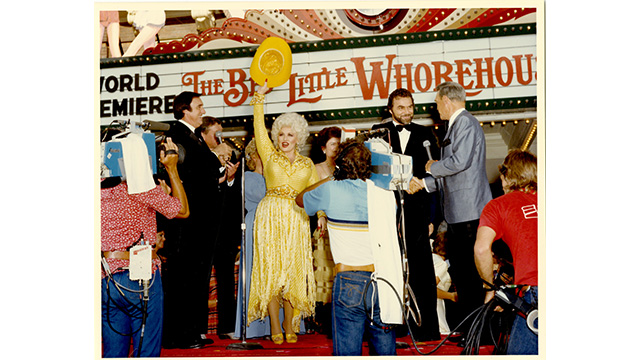 The world premiere of The Best Little Whorehouse in Texas at the Paramount Theatre in Austin in 1982.
(Photo Credit: 1983/011-09, Courtesy of Texas State Library and Archives Commission)

An adaptation of a Broadway play, The Best Little Whorehouse in Texas was released in the summer of 1982 and immediately enraptured audiences with its overtly theatrical representation of a small Texas town embroiled in a scandal brought upon them by the powers that be in far-off Houston and Austin (with the help of one particularly relentless New Jerseyite). The film was shot primarily in-state, making extensive use of locations in Pflugerville, as well as Hallettsville, Victoria, College Station and Austin. Perhaps as a result of their use here, many of the film’s selected locations are still frequently requested by productions to this day. In what is arguably one of the most memorable musical numbers in the film, the Governor (played by Charles Durning in an Academy Award-nominated performance) dances his way throughout the capitol building. The film would top Urban Cowboy’s box office achievement, ending 1982 as the 10th highest grossing film of the year.

To kick off the celebration of the Texas Film Commission's 50th Anniversary in 2021, we're revisiting the decades of the TFC's history and what made them so memorable.

In 1971, the year the Texas Film Commission first opened its office doors, Austin was not what you would call a big city. Certainly one could not have predicted that the state capital, nestled in the cradle of the Texas Hill Country, would one day evolve into the cultural behemoth it is today. Likewise, one would be hard-pressed in those early years to predict the impact that the Texas media production industries would have on a state nearly equidistant from both Los Angeles and New York City. But in October of 1971, a film was released to the American public that would serve as a foreshock, heralding the coming cultural realignment that would place the ubiquitous Texas Lone Star squarely on the map, and marking the state as a destination location for film and television production to stand right alongside those aforementioned iconic coastal communities. That film was Peter Bogdanovich’s The Last Picture Show.

To view the TMO + #TFC50 Virtual Forum: Backstage with Austin City Limits - and to listen to the debut TMO + TFC playlist tribute to the TFC's 50th Anniversary - click the following link: