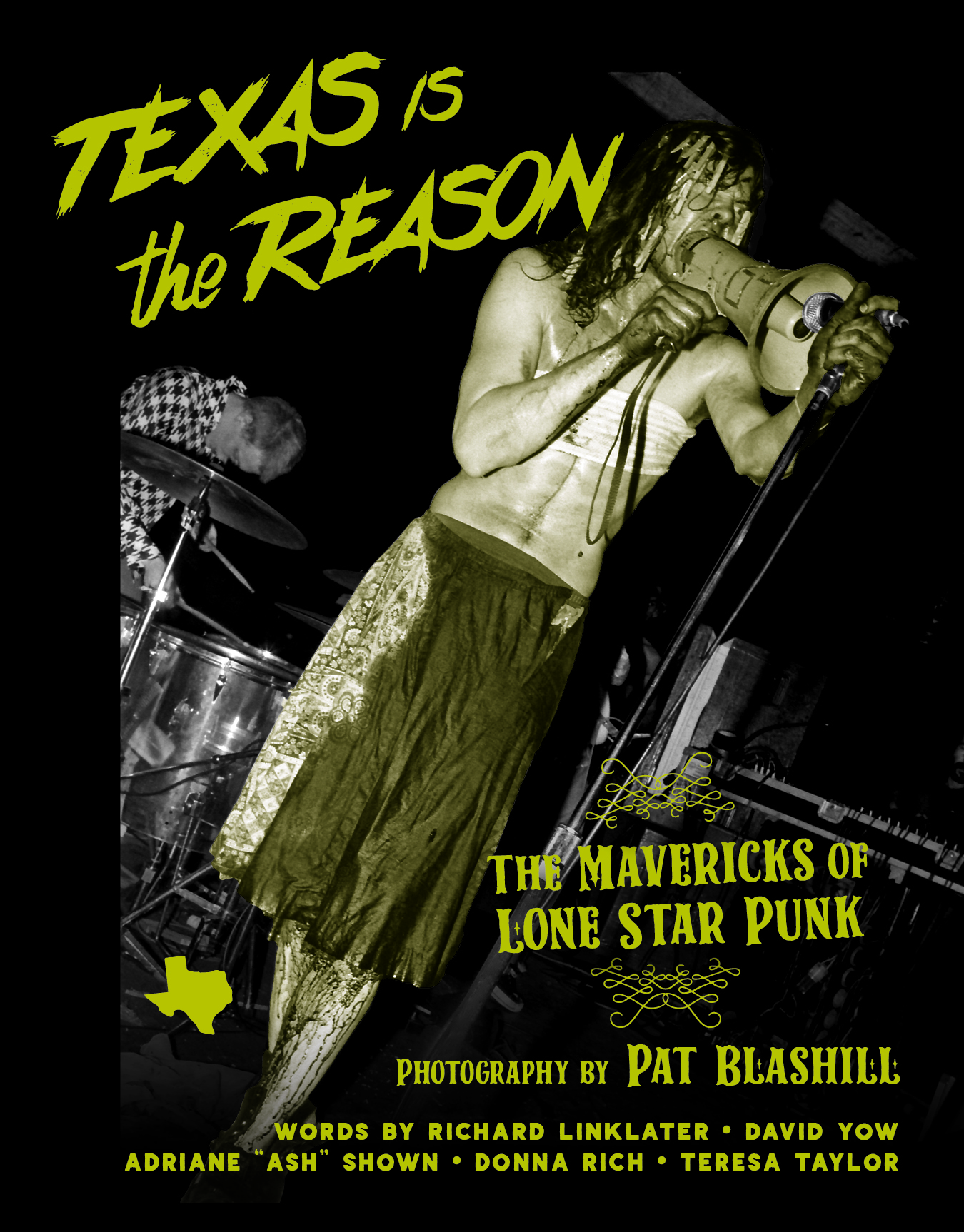 Continuing with our ongoing 5 Questions With An Industry Professional interview series, we spoke with Native Texan and longtime music photojournalist Pat Blashill who has compiled his life's work into a new photo book Texas Is the Reason: The Mavericks of Lone Star Punk (Bazillion Points, February 29), covering the origins of Texas punk rock music and how much of it centered in Austin and San Antonio.

TMO: Can you provide a little background on where you grew up, and where your interest in photography started, and how you started shooting in Central Texas during the late ‘70s/early ‘80s.

Pat Blashill: "I was born and raised in Austin. When we were young, my parents gave us boys Kodak Instamatic cameras to use on our family vacations, and I had a lot of fun with those. Years later, my dad said he could tell I had a good eye from those early snapshots I took.

"In high school, I learned how to shoot a 35 mm camera (and then develop and print the film in a darkroom.) The high school yearbook editor also gave me a book of photographs by Robert Frank, and that changed my life. I started devouring photobooks at the Austin Public Library. I loved Frank, Man Ray, Danny Lyon, Diane Arbus, Nan Goldin and Larry Clark.

"I continued studying photography at the University of Texas. One of my teachers, a great documentary photographer named Dennis Darling, told me that one should photograph one’s own life, because the pictures will mean more to them later. I had already started going to punk shows at the Armadillo World Headquarters and Raul’s, and that was the part of my life I cared the most about, so I started taking my camera with me to the clubs."

Blashill: "When I started, I had some half-baked notions about becoming famous for my pictures, but I don’t think I ever thought I’d make money from punk rock photographs. It was something I loved doing, and something I had to do. Then I became That Guy Who’s Always Taking Pictures at Shows, which was a way for me to fit in, maybe.

"UT didn’t really prepare me for how people can (or cannot) make money with photography. I had to move to New York City to learn about that. And I didn’t care for it much, the professional’s life."

Blashill: "When I started doing 35mm photography in high school, shooting black and white film wasn’t an artistic choice so much as an economic one. Today using your cel phone and Photoshop might be the easiest and cheapest way to do photography, but back then, black and white was the way to go if you wanted to shoot a lot and then mess around with the pictures in a darkroom. It was the do-it-yourself option. Also, working with black and white in the darkroom is very easy—color not so much! I was also drawing on the long tradition of black and white documentary photography."

TMO: When did you realize you had a book that makes for a timeless historical document on your hands? How did the impetus for the book come about?

Blashill: "Well, 'timeless' is a fancy word, and I don’t want to get too carried away talking about these pictures! But I’ve always loved these pictures myself, and I knew that at least some of my Texas friends and my music friends liked them too. I always thought they were a book. About six or seven years ago, I suddenly realized that I wasn’t getting any younger, and that if I wanted to make a book, I’d better get to it.

"But at first, I wanted to put together a book with all the music photographs I’ve taken, including lots of the better known groups I shot in New York City. Luckily, I showed the work to a book editor, and he very gently let me know that I might be trying to do too much, and that telling one simpler story might be better. So I rethought the book as a story about Texas punk."

TMO: Who were your favorite bands to photograph during the time…and why?

Blashill: "I favored the Butthole Surfers, Big Boys, Dicks and really anyone who was breaking the barrier between themselves and the audience. The Buttholes were a dream to shoot, because they were so lo-fi theatrical, like a nightmare B-movie. But even a group like Doctors’ Mob, who were nothing like that, were most interesting to me when they really reached into the crowd and riled them up. I have a picture of Doctors’ Mob onstage at Liberty Lunch—the band is laughing and half the crowd is shooting the finger at them—and I love that kind of band-audience communication.

"What I don’t like are concert photographs that are just captures of the singer or the guitar player bathed in a green spotlight or whatever. Boring! It’s like looking at really excellent, completely uninspiring sports photography."

TMO: What advice do you have for young photographers who are currently out documenting the various music scenes around the state? What do you wish you’d known then about music photography and documenting music scenes that you know now?

Blashill: "Shoot anyone and anything that is interesting to YOU. The people in the crowd are often more interesting than the band. A lot of times, the most interesting stuff happens offstage, at home, or in the car on the way to the show. Take a real camera with you everywhere. Look at your negatives carefully—don’t overlook anything, even if it’s overexposed or seems like a throwaway shot. Don’t be scared of scary-looking people, and be respectful of everyone."