"Politicians from the federal level to the local level have threatened to take guns from law-abiding citizens — but we will not let that happen in Texas," said Governor Abbott. "Texas will always be the leader in defending the Second Amendment, which is why we built a barrier around gun rights this session. These seven laws will protect the rights of law-abiding citizens and ensure that Texas remains a bastion of freedom. Thank you to the Texas Legislature for getting these bills to my desk."

Senate Bill 19 (Schwertner/Capriglione) prohibits any governmental entity from contracting with any business that discriminates against firearm and ammunition businesses or organizations.

Senate Bill 550 (Springer/Spiller) removes the shoulder or belt holster requirements, allowing Texans to carry firearms in whatever kind of holster they choose.

House Bill 957 (Oliverson/Springer) repeals the criminal offense of possessing, manufacturing, transporting, or repairing a firearm silencer. It also ensures that any firearm suppressor manufactured in Texas, and that remains in Texas, will not be subject to federal law or federal regulation.

House Bill 1500 (Hefner/Creighton) prevents any government entity from prohibiting the sale or transportation of firearms or ammunition during a declared disaster or emergency. 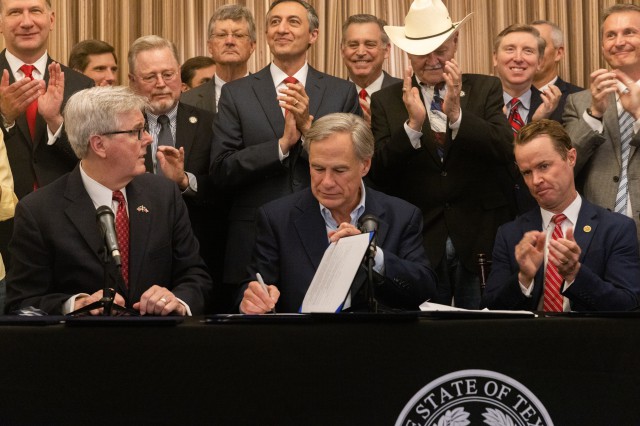