The founders of Oblivion Access are excited to unveil the full music lineup for this year’s fourth annual multi-venue music festival, which will return to the Red River Cultural District of downtown Austin, Texas on June 5-7. Festival badges to the heavy metal, extreme rock, and experimental music festival are on sale now for just $200 at oblivionaccessfestival.com, which guarantees access to all of the shows during the three-day event.

Although the festival recently rebranded, the 2020 music lineup is the festival’s biggest to date with over 50 acts from Texas and across the world slated to perform, as well as a continued expansion in venue partners to help play host to more attendees than ever before. Still ringing true to the festival’s original identity, Oblivion Access will continue to provide fans with some of today’s most sought-after heavy metal, experimental, and punk rock music performances.

2020 festival headliners are set to include a variety of genre trailblazers including UK’s own goregrind and death metal pioneers Carcass; a rare reunion from hardcore punk rockers Youth of Today; industrial rock band Daughters, whose performance at Oblivion Access marks the band’s only U.S. performance currently scheduled for 2020; death metal legends Autopsy, whose set will be their first show in Austin since 2011; the recently reunited shoegaze and space rock band Duster, who will be performing in Texas for the first time ever; singer-songwriter Zola Jesus, whose music is strongly influenced by a unique blend of goth, classical and more ambient sounds; and NYC-based aggressive shoegaze and goth band A Place to Bury Strangers.

The 2019 festival included 2,500 attendees and more than 30 music acts from Texas and around the globe. 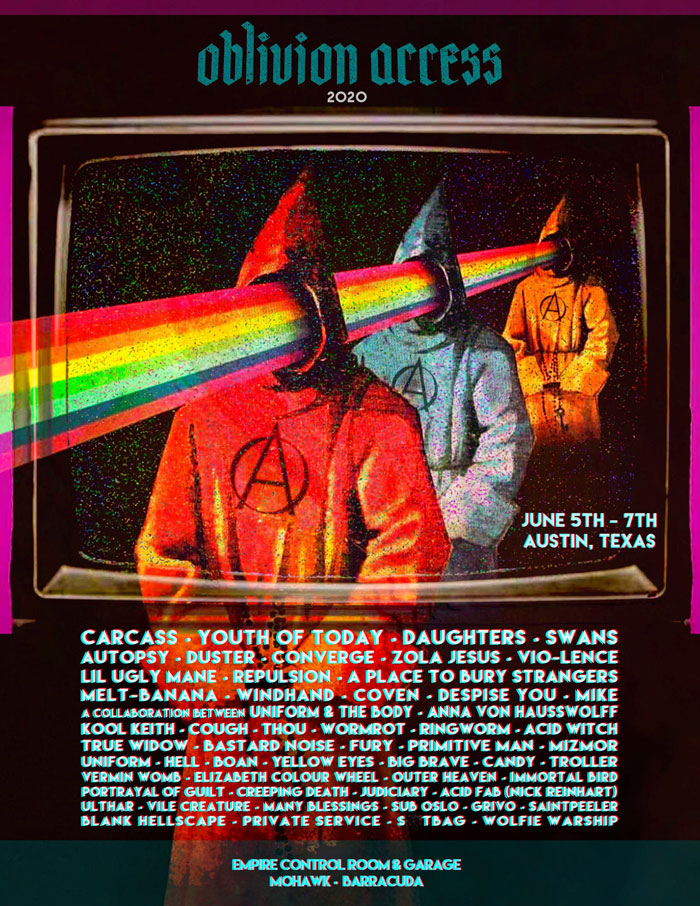 Back to the event calendar