Governor Greg Abbott today ceremonially signed Senate Bill 768 into law at the Crime Stoppers of Houston headquarters. SB 768 (Sen. Joan Huffman/Rep. Ann Johnson) enhances criminal penalties for manufacturing and distributing fentanyl in Texas. Under this law, the punishment for the manufacture or delivery of 4-200 grams of fentanyl is a minimum of ten years in prison or a maximum of life in prison. The minimum sentence increases to 15 years for an amount of 200-400 grams and 20 years for an amount of over 400 grams.

The Governor was joined for the bill signing ceremony by Senator Joan Huffman and Crime Stoppers of Houston Deputy Director Nichole Christoph.

Fentanyl has led to a dramatic rise in overdoses in recent years. Last year, deaths from drug overdoses skyrocketed to 93,000, which was driven by the rise of fentanyl. This year alone, the Texas Department of Public Safety has seized enough fentanyl to kill every person in Texas and California combined — a 950% increase compared to last year. A majority of fentanyl is entering the state of Texas through the southern border.

"We have a duty to fight back against the scourge that is fentanyl in our communities, which is why I proudly signed Senate Bill 768 into law," said Governor Abbott. "The Biden Administration's open border policies have opened the floodgates for this deadly drug to make its way into our communities, but we are taking action to stop this epidemic. By cracking down on the manufacturing and distribution of fentanyl, we will help save lives here in Texas and across America." 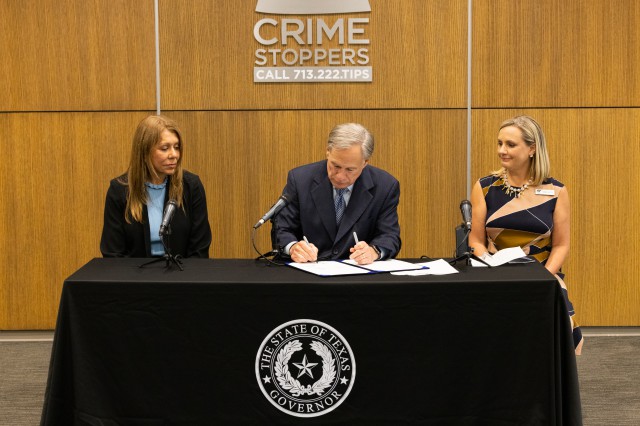